Blog by The Driver

No pay for sites visited ..all free sleepy spots

We woke after a very disturbed sleep this morning to a growing collection of youngsters both male and female congregating to get into the nearby football academy. They had lots of different coloured strips on not sure if it’s teams or age/ability definition. I think the key keeper is late as it seems like a lot of foot tapping from the mum and dad taxi drivers.

Following complaints from The Cook I changed the satnav settings to eco route this morning. She likes back roads We programmed in TERUEL as our destination and we then proceeded for about 30km on the old road before she (The Satnav) decided that the most economical route was by Autovia. Grumbles ensued from Cook about bloody satnav. I don’t know if I took a wrong turn or if satnav wanted to go home .. but we drove right through the city centre of Zaragoza

(where we bought her a few years ago when the old satnav packed in). On leaving the city and climbed onto the plateau, back on the autavia, we recognised the area where we stayed overnight on our way to ALBARRACIN hence the reference to bandit country as it looks very like a cowboy film set up here. 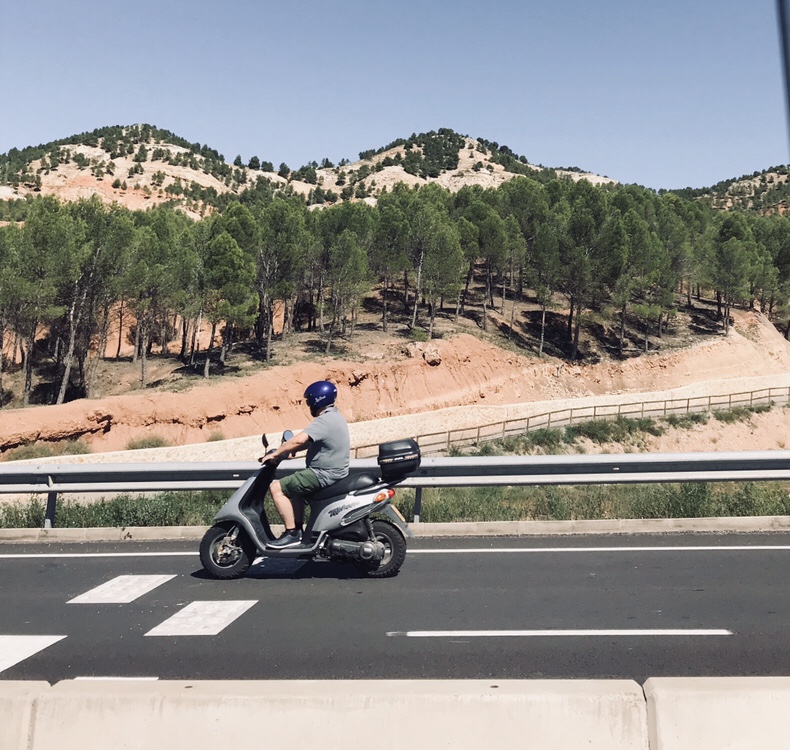 We where overtaken by two large groups of Spanish Hells Angels

all on modified fairly new Harley’s and wearing all the gear (no bimbos though) . They where very well organised with a lead well lit vehicle and a transit following to pick up broken bikes or tired old men as they all looked fairly male menopausal 😜

opposite what appears to be the Guardia Civil offices. We headed for some shady ground under some small trees …Should be safe here .

When it cools down ,it’s about 28c at the moment it’s 4ish now and nearly beer o’clock , 2 large tinnies in the freezer mmmmmm and we will cook our evening meal when it’s cooler. We will check out the Town tomorrow The Cook says.

What the Driver hasn’t said is PUNCTURE yes a tyre has given up the ghost .. He fixed it but a new tyre is on the shopping list for tomorrow