We didn’t expect a 5 mile tunnel … and the border in between France and Spain in the middle of it SOMPORT TUNNEL ..I hate tunnels but this one took me by surprise so I couldn’t get wound up about it and it wasn’t so bad

We left NAVARRENX on a lovely sunny Saturday morning having been wakened by the church bells calling the faithful to prayer at 7am .. that’s fine as we go to bed at the time we were going out when younger ..a lot younger

Off to JACA in Spain ..Sounded an interesting place and we knew of a free aire de camping under the city walls .. Steps up to the Citadella nearly killed me and should have gone up the longer but less steep path ..

Had to have a serious stop to regain momentum.. but all ok still alive to tell the tail .. The Driver forgets I’m years older that he …

Narrow streets with the cafe society having Saturday lunch .. Shops .. and monuments close for lunch so the lady at the Star Fort 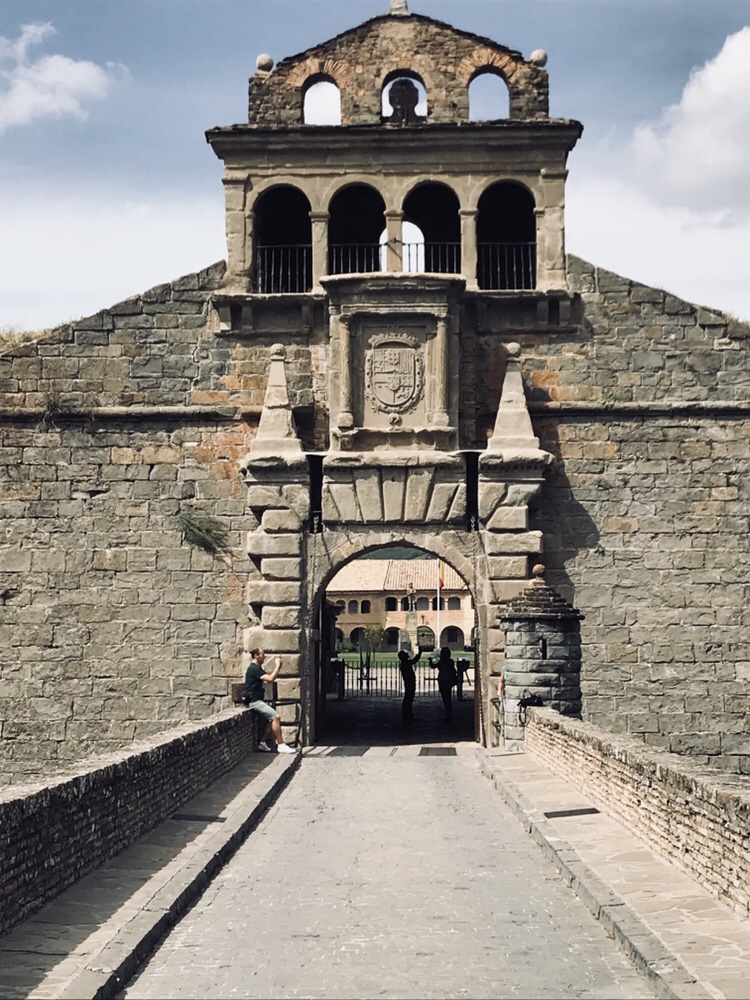 inform us in perfect English as she closed up .. Off back to Hetty to regroup …ITS HOT .. No air .. Not used to heat .. My decision to move on to a higher elevation for a breeze .. The drive on narrow roads and I mean narrow …Thank goodness we didnt meet any other vehicle as we cross country ..Another ECO route to the sleepy spot in the hills …NO .. They’ve built a M WAY on it .. Regroup once again so now off to HUESCA All we know is it has an Aire de Campingcar with 16 place just hope one is ours ..

Tomorrow off to TERUEL and nearer the MAR MENORS

The decision to come to Spain at such short notice hasn’t as yet been explained .. Well here goes … The Driver said a couple of weeks ago “I’ve been a very naughty boy “What the hell had he been up to .. Another woman .. Nooo … Lost his shirt on a horse .. he’s not a gambler.. so Nooo … He’d bought another .. YES ..another boat to add to his collection of Radio Controlled Yachts .. That was his 5th or 6th as I’ve lost count ..I sighed deeply .. “Right” said I .. We had been invited to sail in an event out of The Mar Menors RC Yacht club weeks ago and The Driver was Humming and Arring about it ..Are we going are we not? Decision made by The Cook ..New boat ..We are going ..and now we are half way there