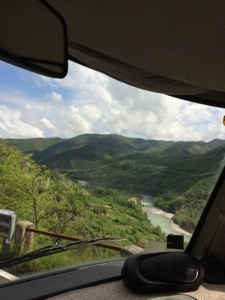 Bum clenching mountain road!
Need I say more about our drive from Genoa to Cremona .. Yes ok .. It’s expected of me to have more to say …
Genoa’s traffic had been described as horrendous but HE says our timing was right getting there from the ferry with its impatient honking Italian drivers ..sleeping in a secure carpark near the harbour and getting away this morning without much fuss … One expects to be cut up by motor cyclists in Italy but we nearly had one mounted on the front bumper as our figure head .. As we left Genoa following the river on a gradually narrowing and climbing switch back tree clad road with occasional tunnels which turned out to be the only straight bits ..some so long one couldn’t see day light at the other end .
Once Hetty crested the highest point with over an hour of non stop climbing to a height of over three thousand feet the vista opened up only to see the sheer drops into the valley bottoms at every turn of the switchback down to the lovely spring flowered pastures with its Tyrollean style villages below ..The top third of the ascent would have been compulsory snow chains less than two weeks ago … No snow for us
Cremona … Whose heard of this town .. You will probably say no .. But wait a moment … I bet you have heard of Stradivarius … He made his now priceless violins here..
The town piazza is considered to be the best preserved medieval squares in Italy and having just returned we can concurs with that .. Superb
Off to Verona tomorrow … 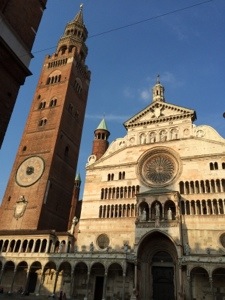